What is a Living Wage? 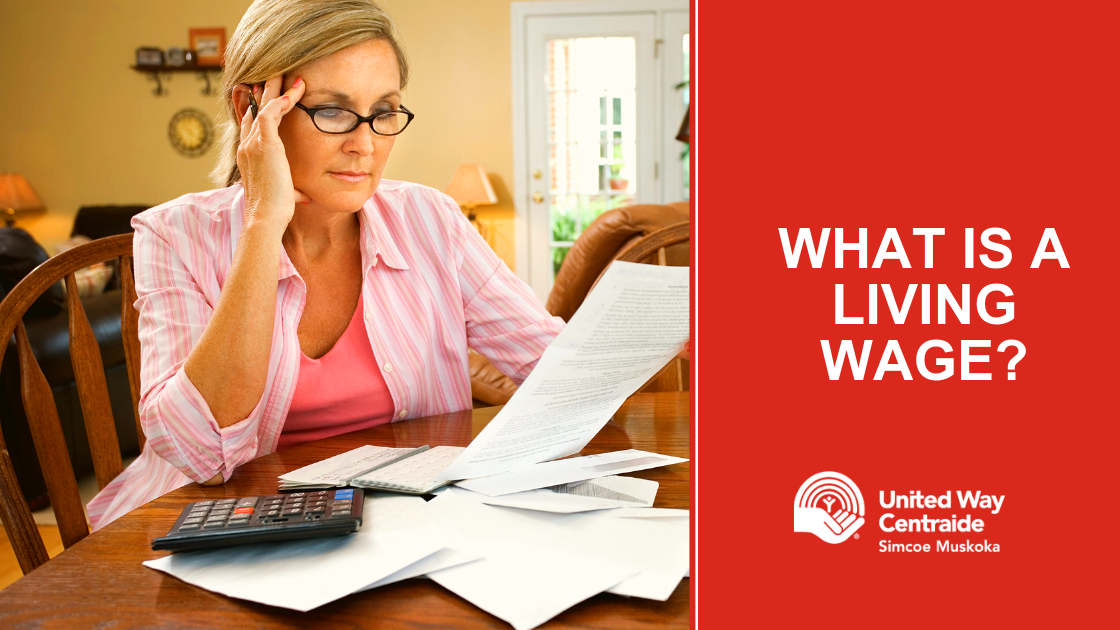 When people think of poverty, they often think in terms of absolute poverty or the low-income threshold. What people don’t normally think of is just how much you need to survive month-to-month.

But what is a Living Wage and what does it mean for people who make it?

What is a Living Wage?

The Simcoe County Poverty Reduction Task Group (PRTG) defines the living wage as “the hourly pay that each parent must earn to cover the basic expenses of an average family of four. It considers housing, food, transportation, child-care, health care, and is the ‘bare-bones’ a family needs for an adequate quality of life.”

To put it simply, a Living Wage allows a family to live life without constantly worrying about finances. See the image below which shows the various costs included in the new calculation by each region.

These numbers reflect the basic needs for a family of four—two parents and two children. Certain numbers will change based on region, but the average for Simcoe County means that both parents need to work 35 hours a week with an hourly wage of $18.01.

What Doesn’t the Living Wage Cover?

You’ll notice that the costs include items like cell phone plans, internet and Netflix. Some might see these expenses as unnecessary, but the Living Wage is meant to cover things that help with both security and health; this includes social and mental health as well.

What the table doesn’t include is the reality that many people face: debt. Even with a Living Wage, paying down debt can be close to, if not impossible, for some individuals and families.

In 2018, TransUnion reported that the average non-mortgage debt is $29,312 per person across the country. On average, an individual carries a credit card balance of $4,154. With high interest rates on debt, paying these cards and loans can be a losing battle.

Unfortunately, the Living Wage does not account for these payments.

It also aims for the minimum costs for things like rent. Barrie is the fourth-most expensive place to rent in Canada, with the average cost of a one-bedroom apartment growing to $1,450 this month and a two-bedroom (which a family of four would need) going for $1,490 per month. The Living Wage allocates $1,415 per month for rent.

Finally, the calculation accounts for a 4% contingency savings, but no other savings. It’s a rule of thumb that people should be aiming to save at least 10% of their income. With a family of four, this doesn’t include saving for things like their children’s education, retirement or family vacations.

It’s important to remember the distinction between the two wages. The minimum wage is the hourly wage that employers must pay employees by law. It doesn’t account for inflation or cost of living.

The Living Wage is the minimum that people need to be paid to lead a relatively secure, healthy life. Companies that pay a Living Wage are known as Living Wage Employers.

According to the Simcoe County PRTG, Living Wage Employers experience:

Muskoka Brewery made history in 2016 when they became the country’s first brewery to offer a living wage for its employees. Working with PROMPT—the Poverty Reduction of Muskoka Planning Team—Muskoka Brewery has started to pave the way for more companies to become Certified Living Wage Employers. The brewery, along with other advocates of living wage, realize that not everyone can make the jump to where an hourly wage needs to be, but they know that every step counts.

With more employers becoming Certified Living Wage Employers, we get closer to lifting people out of poverty all the time. As the movement grows, look for more employers in Simcoe Muskoka to adopt a Living Wage.