Precarious Employment – A Facet of Poverty 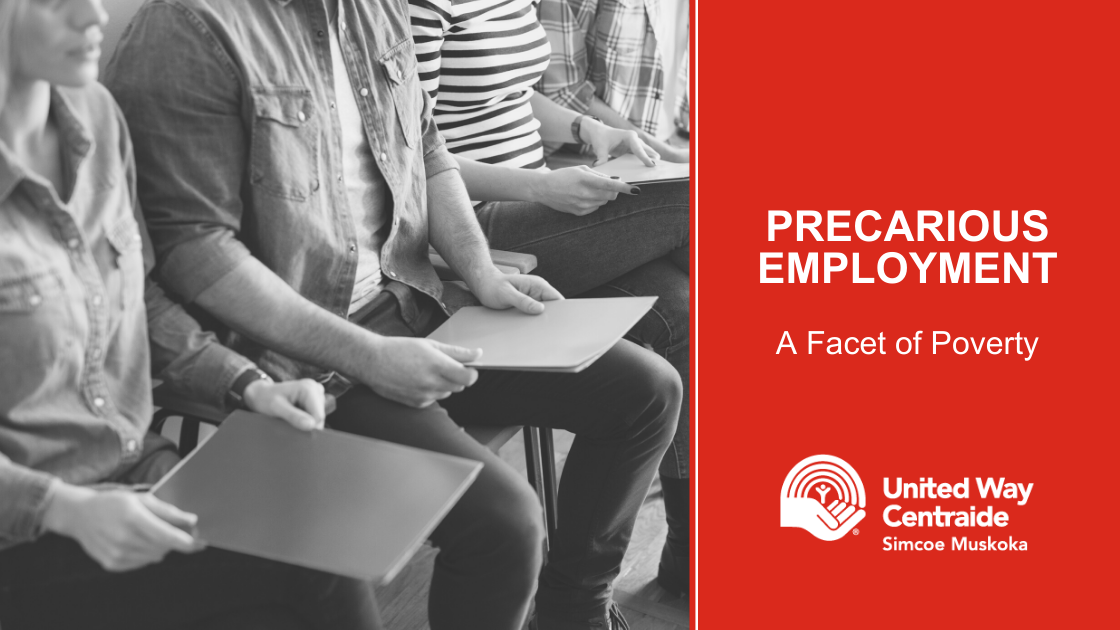 We know that poverty isn’t a simple issue. It’s complex and varies from place to place. It affects different people in different ways, though it universally limits the potential of everyone who is experiencing it.

One of the reasons that poverty is so complex is because of its many facets. While poverty is usually tied to low-income, there are many issues that both arise from and fuel poverty. It ends up trapping people in a vicious cycle, one that seems nearly inescapable.

Precarious employment is one of the facets of poverty, and it’s affecting more Canadians every day.

What is Precarious Employment?

It’s important to distinguish precarious employment from the rise in the gig economy. While there are many people who prefer the role of a freelancer or independent contractor, and others who choose part-time work, precarious employment is identifiable by lower wages and employers filling full-time roles without the legal obligations that a permanent employee would require.

Even with an increasing number of Canadians turning to the gig economy, studies show that more than half of all workers on a short-term contract would prefer long-term tenure and the benefits that such tenure brings.

Who is Experiencing Precarious Employment?

Some demographic groups are more likely to fill precarious jobs. Women, minorities and migrant workers are significantly more likely to take on these roles, and as many as half of all Canadian college and university students are working in precarious positions. People entering retirement age are also more likely to be in temporary, part-time jobs in order to fill the gap that their pensions don’t cover.

What’s the Impact of Precarious Employment?

The most obvious impact of precarious employment is its noticeably lower wages. If you break it down by hour, precarious roles earn up to 29% less than the same job would make in a full-time, permanent role.

If a permanent, full-time employee made $20 an hour, they would earn approximately $1,215 bi-weekly, after tax. Those in precarious roles, doing the same job, might make only $862 after taxes. That’s if they even have a job that provides full-time hours.

To make matters worse, these roles are often characterized by less access to benefits, like pensions or health insurance, and increased uncertainty and stress about where you’ll be working in a few weeks or months. Vulnerable workers are often not covered by labour laws or social security programs, which means they have no rights to holiday pay or sick days. Workers in contracts or temporary positions are often denied the ability to unionize and bargain for better wages, trapping them below the poverty line. 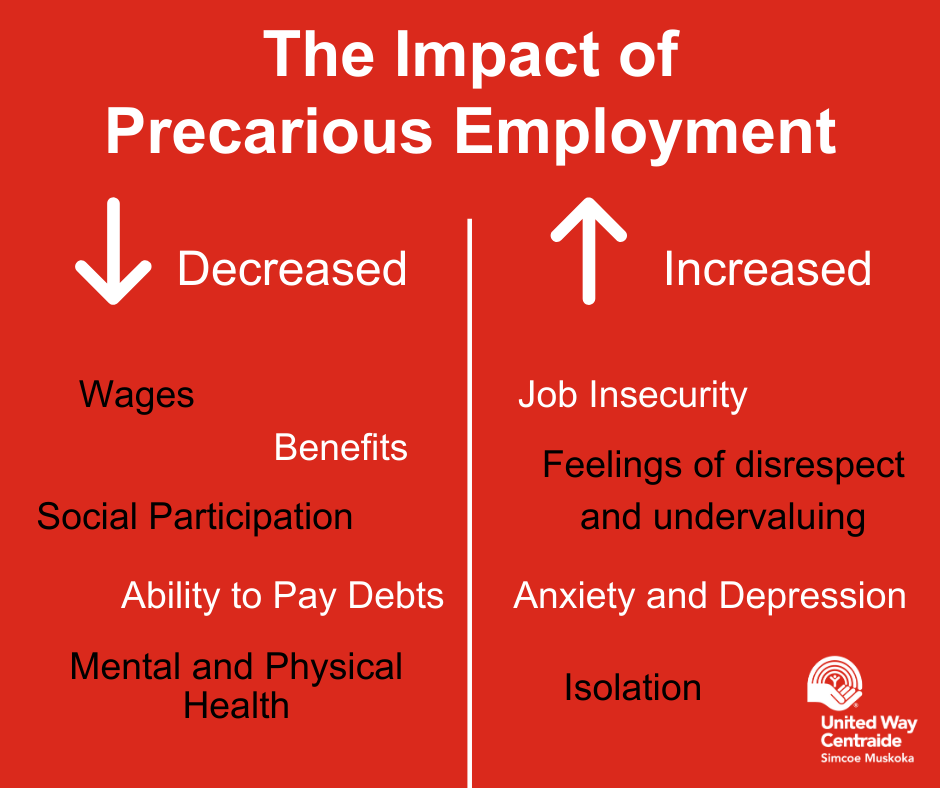 We know that low wages can lead to difficult decisions, like deciding between paying for groceries or keeping the lights on. But not having benefits or paid sick days forces people into work when they are ill, making conditions worse and risking being sent home without pay. Going to the hospital also means a day without pay and potentially expensive medical costs.

Precarious employment stops young adults from moving out of their family home, starting their own lives or planning for the future. It leads to unhealthy, unhappy and low-income homes. It starts to trap the children of vulnerable workers in the cycle of poverty before they have a chance to escape it.

From a medical perspective, the Simcoe Muskoka District Health Unit notes that low-income can lower life expectancy, increase your chances of mental illness, heart disease and diabetes, and leads to an overall lower quality of life. Precarious work is just one facet of poverty that makes individuals suffer a disproportionate amount of health and social consequences.