The Deadly Stigma of the Opioid Crisis 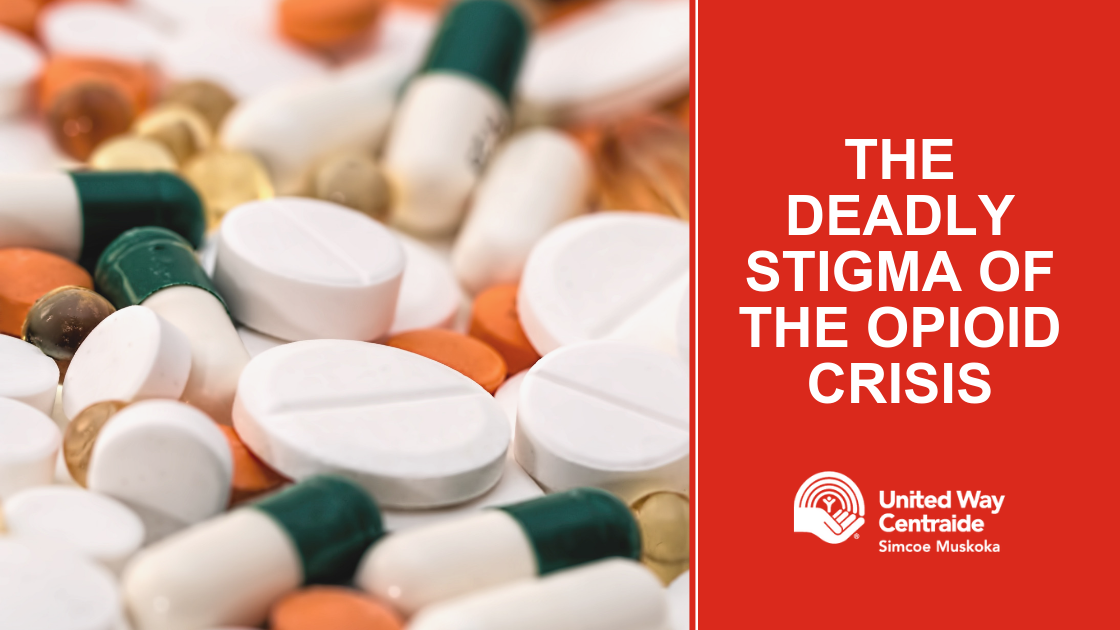 01 May The Deadly Stigma of the Opioid Crisis

Important: If you are looking for immediate or urgent help regarding fentanyl or an overdose, please call 911.

The opioid crisis can sometimes feel like it’s an issue on the other side of the country, something that’s not our problem. But, with more than 10 people across the country dying every day from opioid-related overdoses between January 2016 and September 2018, this is a crisis affecting everyone.

Tragically, these numbers don’t seem to be slowing down. That’s due largely to a lack of understanding and the pervasive stigma associated with opioid use and dependency.

Just what does the opioid crisis look like, what effect has it had on our country and community, and what is the effect of its stigma?

Opioids are a family of depressant drugs. This means that they slow your nervous system and the part of your brain that controls your breathing. This family of drugs includes fentanyl, morphine, heroin and oxycodone. Many people and the media frequently refer to some opioids as prescription painkillers.

The most lethal of these drugs, the ones that have fueled the opioid crisis in Canada, are fentanyl and its analogues like carfentanil. These synthetic opioids are much stronger than traditional drugs. 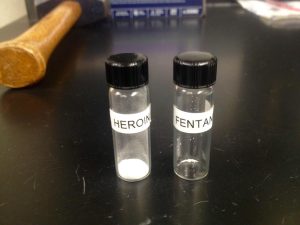 The amount of heroin needed to cause a fatal overdose compared to the amount of fentanyl that can do the same.
Photo credit: Paige Sutherland/NHPR

It takes such a small amount of these opioids to overdose that most people don’t even know they’re doing it.

Between January and September of 2018, the government of Canada reports that there were 3,286 opioid-related deaths across the country. Of this, 93% (approximately 3,056) were due to accidental overdoses. Of those, 73% were attributed to fentanyl and its analogues.

That means approximately 2231 people died from an accidental fentanyl overdose in the first nine months of 2018.

To put that in perspective, there were 660 reported homicides across Canada in all of 2017, a ten-year high for homicides in the country.

Simcoe Muskoka has been affected by the opioid crisis, too. In fact, based on emergency room visits resulting from opioid poisoning and opioid-related deaths, Simcoe Muskoka is impacted much more than the provincial average.

“A lot of people see it as a big-city issue,” says Dr. Lisa Simon of the Simcoe Muskoka District Health Unit. “But it has a bigger impact in small and medium cities.”

Dr. Simon also explains that people don’t understand who is using drugs. While some people might experiment with drugs, many people affected by opioids have pre-existing key risk factors, such as past trauma and mental illness. It doesn’t target just one demographic.

It’s clear that the opioid crisis is a real threat to Canadians, yet it’s still misunderstood by most. This misunderstanding creates a stigma surrounding opioid use, a stigma so strong that it has lethal consequences.

With the devastation that the opioid crisis brings, it might be tough to see that one of the strongest factors of fentanyl-related deaths is the public stigma of drug use.

The government defines stigma as the “negative attitudes and beliefs about a group of people due to their circumstances in life. It includes discrimination, prejudice, judging, labeling, isolating and stereotyping.” 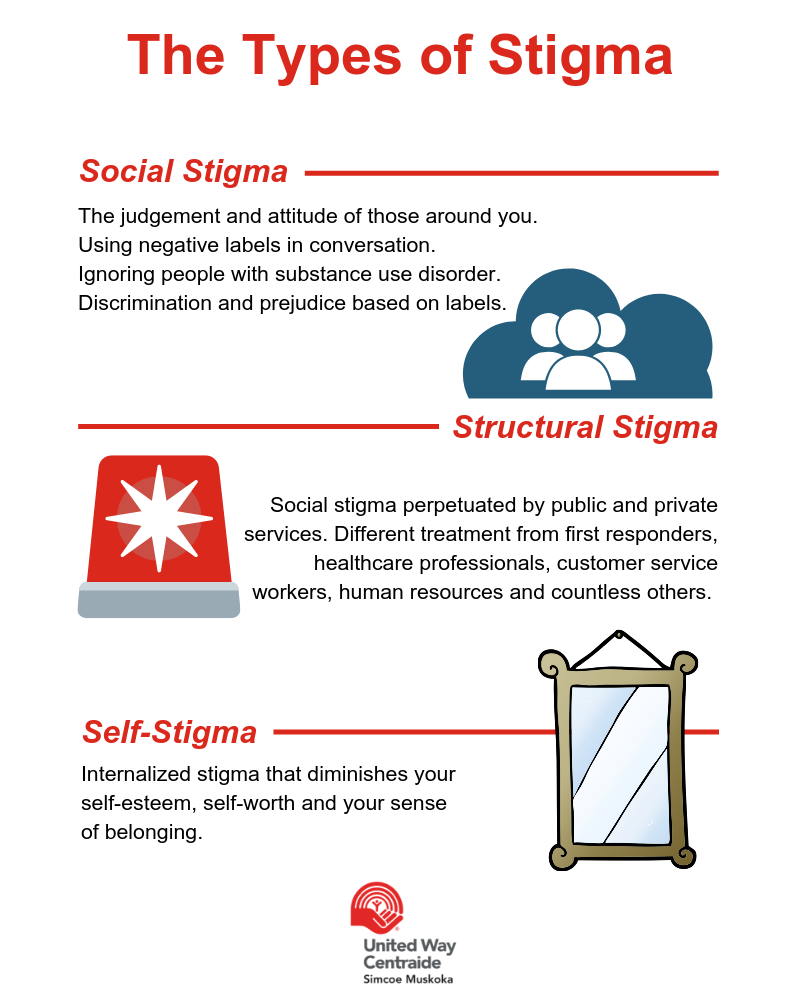 Furthermore, the Canadian government breaks down stigma related to drug use into three categories: social, structural and self-stigma.

Social stigma is the judgement and attitudes of those around you. It’s looking down on friends and family who use drugs. It’s the everyday use of negative labels in your conversations and the shows you watch. It’s outright ignoring people who have a substance use disorder.

Structural stigma is social stigma from people who offer a public or private service. It’s when a first responder, cashier or doctor treats someone differently because they have a substance use disorder. It’s ignoring someone who uses drugs or not taking their request seriously. It’s withholding treatment until they “get their using under control,” thus limiting their options and furthering the stigma they face.

Self-stigma is seeing all the negative messages, attitudes and actions that surround you and internalizing them, creating your own stigma about yourself.

Labels like junkie, stoner, addict or crackhead are common in everyday conversation and in the media, but they create and strengthen stigma. Using terms like drug addict might not seem harmful, but they have an unconscious effect on everyone who hears it, reinforcing social and self-stigmatization.

The dangers of stigma

When a person experiences stigma of any kind, they’re seen as less than everyone else. They become the other; someone who isn’t as valuable as other people.

When people are stigmatized, they start to believe those messages about themselves. They see themselves as deviants, which lowers their self-esteem and self-worth. It stops them from seeking treatment.

Worst of all, stigma stops people from seeing that addiction is not a choice, but a chronic disease of the brain known as substance use disorder.

In fact, 76.7% of people believe that addiction is fully or partially the choice of the person who suffers from the illness. The medical, fact-based understanding of opioid and drug use as a medical illness is overshadowed by the misconception that addiction is a weakness or conscious choice by people who suffer from this disorder.

This stigma, this public shaming and ridicule of people who use opioids, leads to just over 11% of people receiving the specialized treatment they need to help with their substance use disorder. It means that only two in 10 people who need this treatment even bother seeking it out in the first place.

Stigma is a major barrier to people even considering getting treatment for their substance use, second only to the cost. It’s the third-strongest factor that prevents people from receiving treatment once they do consider it, following cost and denial of their illness.

Stigma causes the public to push back against the creation of needle exchanges, substitution therapy and safe usage sites, despite the evidence that all of these options decrease drug use.

How can we defeat the stigma of opioid use?

Unfortunately, there’s no single or easy answer to that question. The public perception of drug use and addiction is so engrained by decades of policies and dehumanization that it will still take time to end the stigma of opioid dependency.

It starts with each of us, though. One act at a time is the only way that we can change the public conversation about substance use disorder. Here are some ways that you can help out. 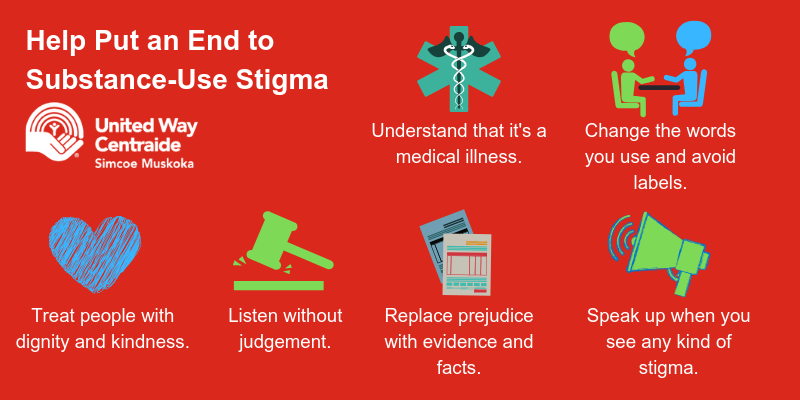 Dr. Simon encourages us all to check our own biases and get informed. Talk with your family, friends and in your community to drive a conversation that pushes back against stigma. The Simcoe Muskoka Opioid Strategy (SMOS) says it best when they say, “People who use drugs are real people.” If you want to get involved with helping in our communities or just want to learn more about the opioid crisis and the stigma associated with it, SMOS is a great place to start. There’s a lot of work in our communities from many different partners throughout Simcoe Muskoka and across the country. Unfortunately, it isn’t enough and there is still a lot of work to be done.

To help shed light on this crisis and the stigma associated with it, United Way Simcoe Muskoka is screening Painkiller: Inside the Opioid Crisis to shed light on the country-wide problem that is hurting our communities here at home. Join us on September 25, 2019 at the Grandview Mark O’Meara Golf Course in Huntsville. Click here to learn more about the event.