The Magic of Holiday with a Hero

09 Dec The Magic of Holiday with a Hero

Posted at 15:01h in #LocalLove, Featured, Holiday with a Hero by Douglas Landsborough 0 Comments
Share

On Saturday, November 30, United Way Simcoe Muskoka held our inaugural Holiday with a Hero event in Barrie. The event, which spanned the morning of the 30th, was a great example of a community coming together to provide an incredible holiday experience for some of the most vulnerable children and families in our community.

What is Holiday with a Hero?

Holiday with a Hero was first imagined when one of UWSM’s volunteers and Board members, LCol Charleen Coulbeck, brought the idea forward. LCol Coulbeck had participated in Chatham-Kent’s Holiday with a Hero last year and was extremely moved by the time she had. If you haven’t already, check out her blog about what inspired this event.

United Way Simcoe Muskoka embraced the idea for Holiday with a Hero with excitement. The idea was a heartwarming one: pair local children in need with a local Hero—police, firefighters, paramedics and CFB Borden personnel—and give them a gift card to buy $100 worth of gifts for the families of the children. After that, the children get on a bus to be part of an emergency vehicle procession to a pancake breakfast, gift wrapping and activities like a bouncy castle, face painting and cookie decorating.

After explaining the day to us, LCol Coulbeck added, “There’s only one rule: the children have to buy a gift for themselves, too.”

That was back at the end of June, and we knew that an event like Holiday with a Hero was going to take a lot of planning so, together with support from CFB Borden and Simcoe Muskoka Family Connexions, we started right away.

It Takes a Community

Holiday with a Hero would not have been possible without some incredible community partners coming together. LCol Coulbeck, Honorary Colonel Jennifer Armstrong-Lehman and CFB Borden were instrumental in the logistics of the entire operation. Sergeant Mark Chalk of the OPP gave us insights from a Hero’s perspective and Simcoe Muskoka Family Connexions provided the essential knowledge about working with children in need and identifying the children that would best benefit from this experience. Holiday with a Hero doesn’t just provide a holiday season filled with gifts and fun, but it also provides a positive interaction for the children with a uniformed individual—interactions that are usually negative and involve an emergency or, in some cases, result in a child being taken away from their family.

“[My son] has had a lot of negative involvement prior to adoption with the police. Up to and including apprehension. He very recently had a scare where a threat by a neighbour was made about police coming and it totally triggered him to a bad spot thinking he was being taken away again. It would be great to get to see the positive interaction.” – A parent’s response when told about Holiday with a Hero

With such great partners on our team, UWSM got out in the community to spread the word about Holiday with a Hero and fundraise for it. It was important to us that 100% of donations went towards the event, with neither United Way Simcoe Muskoka nor any of our partners taking any administrative fee.

And the community truly came together for this great event. We can’t thank the following sponsors enough for making Holiday with a Hero possible:

In addition to these sponsors, more than 20% of the funds needed for Holiday with a Hero came from individual donors throughout our communities. It was incredible watching all these different people, companies and organizations come together to make this event possible.

There were some other stand-out community members, too. Walmart Barrie North hosted the shopping in the morning, agreeing to let us in earlier than opening to set up, providing snacks and juice for the children and working with us up until the night before to make sure things went smoothly. McDonalds in the Walmart provided coffee, hot chocolate, cookies and balloons for volunteers and the children. The Barrie YMCA was also very helpful in working with us to prepare the space for the activities that took place after the shopping. 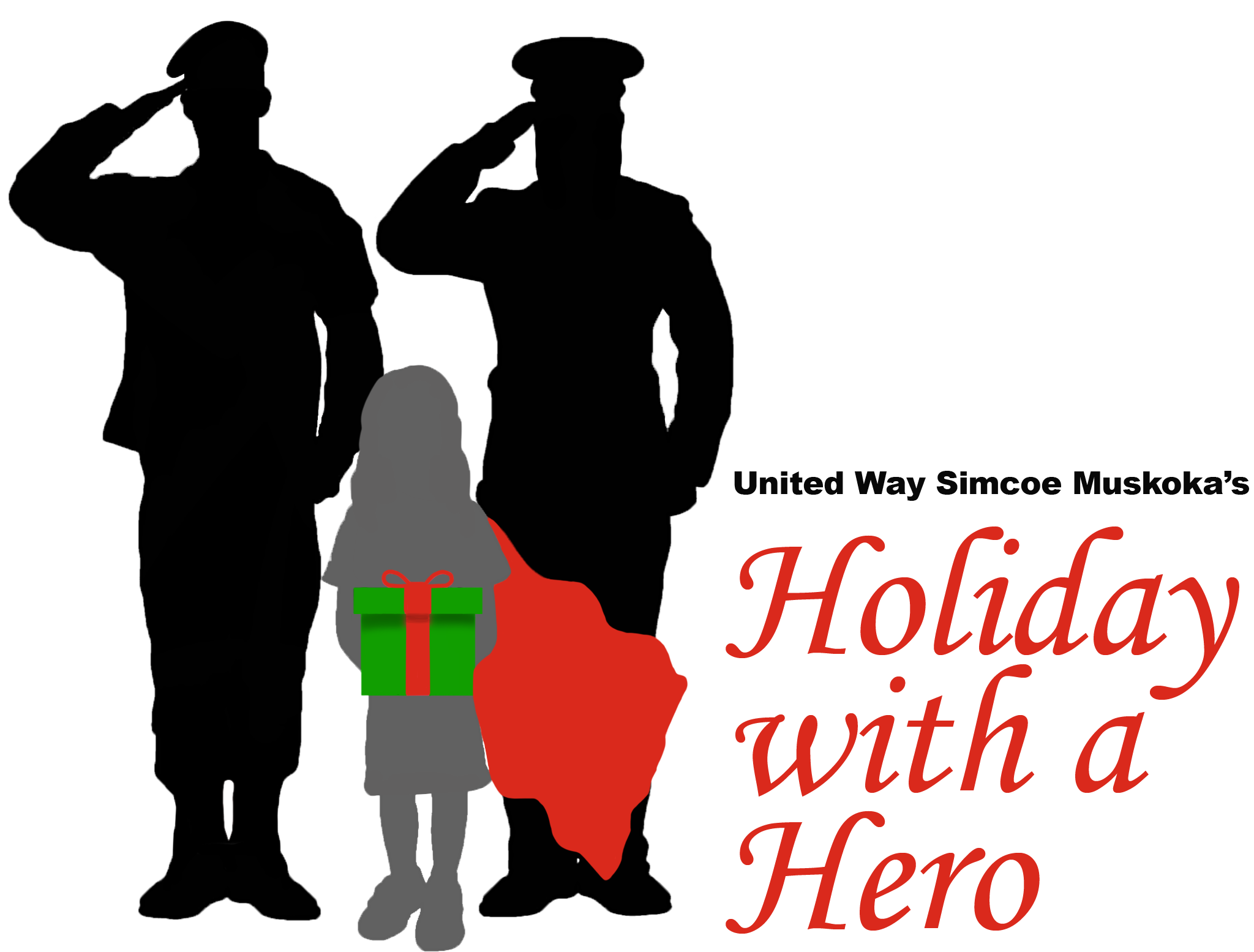 There were even more local businesses that helped make Holiday with a Hero possible. Canplas ran a product drive to get the gift wrapping, bows and tape we needed to wrap all the gifts (it was a lot!). De Luxe also pitched in by providing some massive rolls of wrapping paper and a paper cutter to make the morning easier for the volunteers. Sweet B’s Bakery in Bradford baked and donated the 200 cookies that were decorated by the children, too!

Finally, the Holiday with a Hero logo was developed with help from Georgian College design student Victoria Tassielli, thanks to the Non-Profit Design Partnership that United Way Simcoe Muskoka helps facilitate with Georgian College.

While Holiday with a Hero was spearheaded by United Way Simcoe Muskoka, the morning was only successful because of individuals, businesses and organizations from across Simcoe County and Muskoka coming together.

Before we knew it, November 30 was here. Almost six months of planning had led to one morning. UWSM staff and volunteers were arriving at Walmart before 6:00am (or 0600 when you’re working with the military) to prepare for the children arriving at 6:30.

By 6:15, LCol Coulbeck was briefing all the Heroes that had volunteered. Heroes included Ontario Provincial Police, Barrie Police, Barrie Fire and Emergency Services, County of Simcoe Paramedics and CFB Borden personnel. OPP Commissioner Carrique, Barrie Police Chief Greenwood and County Paramedic Chief Robert all participated too, making for 85 Heroes who got involved with the shopping.

After LCol Coulbeck briefed the Heroes on what to expect, Chief Lamontagne gave everyone a brief overview of the emergency vehicle procession, excitedly proclaiming that the procession would leave at 0822. Following that, UWSM CEO Dale Biddell thanked the Heroes for coming and explained the significance of Holiday with a Hero before introducing Commissioner Carrique, who spoke to the importance of Heroes giving back to the community and the children who would be arriving soon.

And, just like that, the day began. Even though it was early, you couldn’t miss the smile on the faces of the 77 children who started to arrive just at the end of the Commissioner’s remarks. Each child was given a camouflage toque, handknitted for the Base, and partnered up with a Hero to go shopping.

Some of the children knew exactly what they wanted to buy and who to buy it for, armed with scribbled lists. Other children worked with their Hero to make sure they bought gifts for everyone important to them. More often than not, the children needed reminding that they needed to buy something for themselves, too.

It was heartwarming to see how excited the children were, pushing around carts with their Heroes and getting gifts for those closest to them. Wherever you turned, you saw them excitedly putting gifts into their carts or asking questions to their buddies.

“I was able to share a special moment with my 11-year-old child. When shopping for his 18-year-old brother, he came across a game. I watched as he held the game and stared at it for a good two solid minutes. I then asked if he had ever played that game before. He said, ‘My brothers and I used to play this in our old house before we were taken to foster care but were not able to bring it with us, I think I will get it for him so we can play together again.’

“It was a pretty touching moment for me.” – Major Wendy Strain, CFB Borden Hero

At checkout, we had two United Way Simcoe Muskoka volunteers who had gift cards to cover the couple extra dollars that we were sure would be needed. But when the need for those cards arose, the Heroes were quick to cover it themselves.

After loading the gifts up to be transported to the YMCA for wrapping, the children got on some military busses to join the emergency vehicle procession. The procession included police cruisers, an ambulance, firetrucks and even a Light Armored Vehicle from Base Borden, spruced up holiday-style. True to his word, Chief Lamontagne had the procession moving at exactly 0822.

Once part of the procession down Bayfield Street, most of the children were excited for all the sirens and the fact that they didn’t have to stop for red lights. Others started off a little concerned, asking if the sirens were coming after them. Volunteers were quick to point out that the sirens were there to help them and were bringing them to breakfast and games.

Looking around in wonder, one young boy asked, “Is this all for us?” We were happy to tell him that it was.

Once the procession arrived at the YMCA, the children were greeted by more than 60 volunteers waving to them in the driveway and Mr. and Mrs. Claus up in the basket of a military firetruck. Inside, the children and Heroes had their choice of having breakfast, wrapping gifts, decorating cookies, getting their face painted, taking photos in a photobooth and jumping in a bouncy castle.

Each pair spent the remainder of the morning having fun, getting to know each other better and embracing the holiday spirit. The breakfast, prepared for and served by military cooks, was a hit, and the gift wrapping took place on both tables and with Heroes sitting next to the children on the gym floor.

With all the excitement of the morning, combined with the activities and the early drive in (some of the children came from Muskoka!), everyone was ready for a nap before lunch rolled around. Despite that, many of the kids didn’t want to leave. They loved the morning spent with their Heroes, with one paramedic having to walk around with a child clung on to each leg!

While feedback from children and parents is still coming in, the words we’ve gotten back already have been overwhelmingly positive.

“Our daughter felt so special during the whole event…Thank you so much for all the incredible work that you’re doing.”

“My children loved the experience and time they had to have fun with their buddies, as they called them. Although the kids were together, they are still talking to each other about their Hero.”

“All the children I brought to this event were in awe. They enjoyed their Heroes and shared with their families that it was an experience like nothing they have ever had.”

The parents and children weren’t the only ones who were impacted by Holiday with a Hero. One of our Heroes wrote, “Thank you so much [for] today. The joy seen on those children’s faces was priceless. I am so honored to have been able to meet such fantastic little individuals. And to all the heroes, great job!”

From everyone here at United Way Simcoe Muskoka and everyone involved with planning this event, thank you to the volunteers, Heroes, partners and families who made our first Holiday with a Hero such a resounding success. Thank you to the children for waking up early and making the last six months completely worth it.